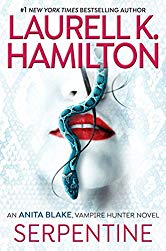 Summary: Anita Blake travels to Florida for Edward’s wedding where half snake people are trying to hide their presence and where the bodies of dead wedding guests have been found.

Why I chose this novel:

So I’ve been rereading series that caught my attention the first time through. Anita Blake is one of those series. I think what caught me most about this series was the way the magic felt real and dark. Anita investigated crime like a cop. Her relationships with the other characters developed with her understanding of the world around her. Anita is not in a one-pantheon kind of world. The stories are not wholly modern, Greek, or Indian in nature. Also, I tend to like kick-ass and strong characters, whether they are women or men.

The problem I have with the Anita Blake series is two part: too much evolution and not enough evolution. Anita started out as very strict in her beliefs: she didn’t like vampires; shape changers were dangerous; she didn’t trust them; they were the enemy. Then she changed. She fell in love with both a werewolf and a vampire. Then the magic got out of control. Anita became part of the triumvirate, the power took control of everyone’s lives, and the books became about sex. Men came and went (don’t get my started on the Cynric plot which needs to be permanently cut from all the books). Then Anita attempts to cut me from her lives. While all the romance was, or was not, happening, Anita went from being aligned with the cops, to being the target of crime, to being a one trick pony who didn’t need to investigate. I was completely fine when there was positive evolution happening; however, the magic/sex overtook this series.

The romance with the core characters became overshadowed with the sheer numbers of new lovers. When the old lovers appear, there is no emotional development with them. Even in Serpentine, when Anita is with three of her core men (Micah, Nathaniel, and Nicky) there is no real deepening of that connection. Micah indicates he is will to try intercourse with Nathaniel; however, that is not an emotional deepening, just another area of sex to explore. Michah and Anita acknowledge that their work keep them from Nathaniel, but the resolution is to have more sex when together. Again, this doesn’t allow for the emotional connection I wanted, it allows for more sex scenes, which I don’t necessarily need. So the romance is being overshadowed by the sex, and unfortunately, the evolution of the magic kind of required it in someways because the core magical base became sex.

That magic also took over the investigative elements of the books. When I think back on my favorite Anita Blake books, I think of the story of: Raw Head and Bloody Bones, where Anita investigated the murder of the children, chased after fairies, fought off the evil developers, dealt with scary vampires that meant to take over, bullied her way into a local killing, and participated in a dangerous hunt; Obsidian Butterfly, where Anita investigated the walking dead, discovering the local legends, learned about necromancer black magic, dealt with would be gods, and battled the enemy; Burnt Offerings; Circus of the Damned; The Harlequin; and Skin Trade. Most of the Anita Blake novels I remember afterwards are ones with hunts that required investigation and a show of power. Serpentine doesn’t have that. It does have a tactical advance at the end and the interview of at least on suspect, but honestly, Anita was basically investigating the evil before there was a crime and there was ever only one group of suspects. There was no real mystery or suspense for me. If I had to guess, the overdeveloped magic took over this series and the underdeveloped mysteries and romance was abandoned.  Therefore, three stars.

This is one of those series where I might recommend specific novels but not necessarily the whole series.