My featured author this month is Heather Hayden, and her book Upgrade will be released soon.

Because I am excited about the upcoming book, let’s start with the questions.

Your current WIP is called Upgrade. Could you share a bit about it?

Upgrade is the sequel to Augment, a YA science fiction I published in March 2015. The sequel has been long coming, but I’m pleased with how it’s turned out—it’s currently in the last stages of revision. Upgrade continues the adventures of Viki, a teenage girl who loves to run, and her friend Halle, an AI who likes to use an avatar of a cat. Here’s the (still rough/in-progress) back cover blurb:

In this sequel to Augment, sixteen-year-old Viki’s uneventful summer ends when she and her AI friend Halle are contacted by a rogue AI called Talbot. A surprise visit from an old adversary soon casts suspicion on the rogue and its intentions, and Viki and Halle find themselves caught up in another investigation—this time, as the investigators.

Viki struggles to balance the investigation, homework, and her social life—the latter renewed by a blossoming friendship with a recent transfer student, Darnell. Meanwhile, Halle is torn between helping a fellow AI and stopping a potentially dangerous fugitive. Several cyborgs are missing from the military laboratory. Talbot denies having anything to do with the theft, but Halle isn’t sure whether to trust the other AI. After all, Talbot was developed to control the cyborgs.

As accusations fly, Halle and Viki search for the truth about Talbot—and in the process, uncover something surprising about Darnell. The truth could destroy Viki’s new friendship and place the entire world in grave danger.

For those who haven’t read Augment, could you tell us something about Viki and Halle? Why does Viki love running so much? Why does Halle choose a cat form, instead of something else?

When she was young, Viki was in a bad accident (it’s never explained exactly what) and she gets implants—two in her legs and one in her brain. It took years of physical therapy before she could run again, so being able to do so reminds her of all the freedom she has now.

Halle likes cats. It admires them for their independence and intelligence. (If Viki’s family was okay with it, the AI would probably adopt several, but unfortunately her mother is allergic to furry animals.) When it was inspired by game avatars to start using one for interacting with Viki, Halle chose the form of a cat. Its coat color does change, usually depending on Halle’s mood, and sometimes just for fun.

You’ve created an in-depth world with a very sophisticated AI. I like how Halle has her own human type personality yet stays detached such as not accepting a gender. Tell me about your process. How do you brainstorm story ideas?

Sometimes I’ll bounce ideas back and forth with my sister—she’s a great sounding board and we can frequently solve a lot of plot holes during a walk. Most of the time, though, an idea just comes to me and I sit down and write it. Inspiration can come from pretty much anywhere—a song, a conversation, a line in a book or movie. I just have to be sure to write the idea down before it flits away again.

So what happens if the idea comes in a dream or while you are driving? Do you wait until you get home and have a computer handy, do you pull out notebooks, do you dictate to your phone? How do you end up writing the ideas down?

Although we have a couple of typewriters floating around, I don’t use them frequently. They’re fun and look cool but you have to type everything up again afterwards! So 99.99% of my writing happens on my laptop, where I keep everything organized and have the internet on hand to look something up if need be (unless, of course, I’m somewhere without internet. Too bad the Cloud from the Augment series doesn’t exist!)

I do have Dragon Naturally Speaking, which I’ve used a few times, but dictation is frustrating when I have to remember to tell it punctuation and it keeps misunderstanding me. And I also write a bit longhand, usually when I don’t have access to a computer and need to get something down before I forget it. My wrists have issues and long periods of longhand make my right one hurt a lot, so I try to avoid that. Keyboards don’t seem to bother me, thankfully!

I personally like the feel of writing a story out longhand. There is something comforting about the motion of writing. When you do write longhand, what’s your favorite kind of pen or pencil to use?

I have a lovely blue ballpoint pen my grandfather made me, which is my current favorite. Someday I’d love to use a fountain pen, though, or even a quill pen, because they look stylish. 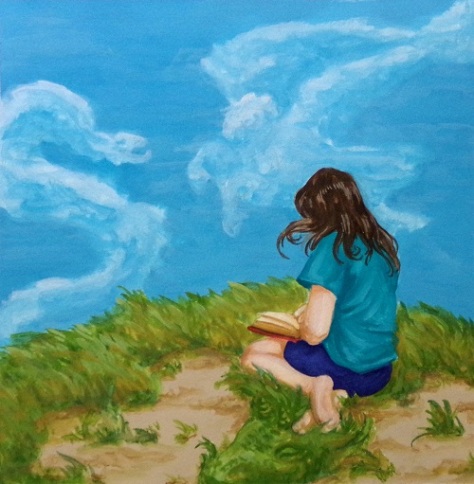 Though a part-time editor by day, Heather Hayden’s not-so-secret identity is that of a writer—at night she pours heart and soul into science fiction and fantasy novels. In March 2015 she published her first novella, Augment, a YA science fiction story filled with excitement, danger, and the strength of friendship. She immediately began work on its sequel, Upgrade, which continues the adventures of Viki, a girl who loves to run, and her friend Halle, an AI. You can learn more about Heather and her stories through her blog and her Twitter, both of which consist of equal amounts of writerly things and random stuff she’s interested in.